There's actually an impressive waterfall behind Chris and me.

Elora today is a quaint village full of specialty shops. The buildings are mostly limestone structures dating from the 19th century. Carl often visited as a child, and several tales of his adventures there have survived. Once, while playing a game of chicken with other boys, he leaned out too far over a cliff, fell into the river, breaking a couple of ribs. He mentioned a place called Lover's Leap in his writings. I hoped to find that.

A shopkeeper told us of a trail that would lead down into the Gorge. I hoped to see some limestone caves that Carl mentioned in an 1894 short story he wrote. We found the path and walked quite some way into the woods before a primitive staircase led down to the river. We discovered one small cave, and followed the stream (a tributary of the Grand) to the junction with the river. Getting there involved a great deal of rock hopping, which I’m good at after having spent my childhood in Maine. Mike insisted on going first so he could help Wendy and I as needed. Chris tried not to laugh. He knew I had no need of help. I’ll never discourage a man from being a gentleman, and apparently neither would Wendy because she didn't need help either. (We skipped over the rocks at twice the speed of the guys on the way back.) 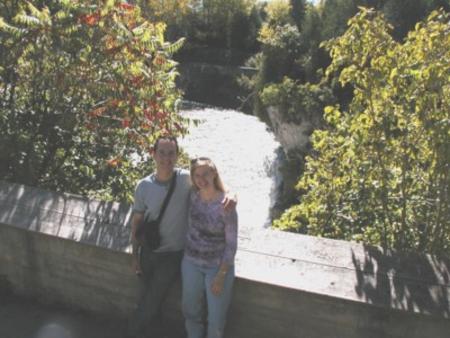 Chris and me in Elora Gorge 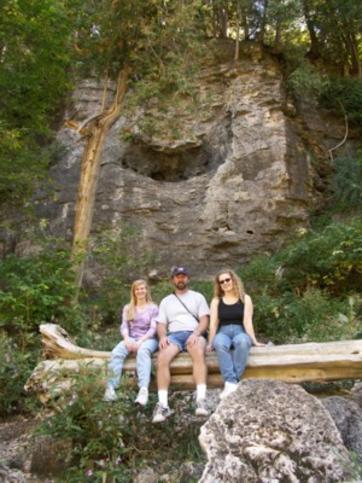 It was another early morning, aided tremendously by a dash across the street to Tim Horton's for mochas while my cousin, Chris, and I waited for Mike and Wendy to be ready for the day's adventures. They intended to head back home from the furthest point north on our day's drive, namely Elora.

Carl's mother, Isabella Laird, was raised in that town. Her parents had been among the first settlers of the area, arriving in 1841, and many of her siblings remained in the vicinity during Carl's childhood. His uncle, Joseph Laird, was a potter there; it’s likely that Carl learned the craft from him.

We drove in separate cars, often stopping for photographs along the Grand River. South of Elora, the scenery was pastoral – rolling fields and a nice lazy river, but a little way upstream, in the Elora Gorge, the Grand was anything but lazy. 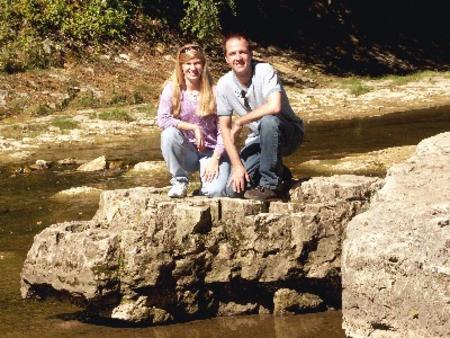 When we reached the Grand, I picked up a few rocks and a piece of driftwood, as I do when I want a tangible reminder of a place. We made our way to a group of rocks in the middle of the river to help rescue someone who tried to canoe through there and fell out of his boat. He was in no real danger, but the current was surprisingly fast.

I turned and saw a huge outcrop of rock that appeared like someone's head perched atop a very long neck. I took several photos, thinking it must be some kind of landmark, and it was. Lover’s Leap! 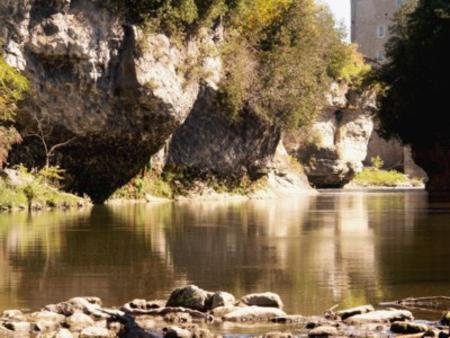 The Grand River from inside the gorge. 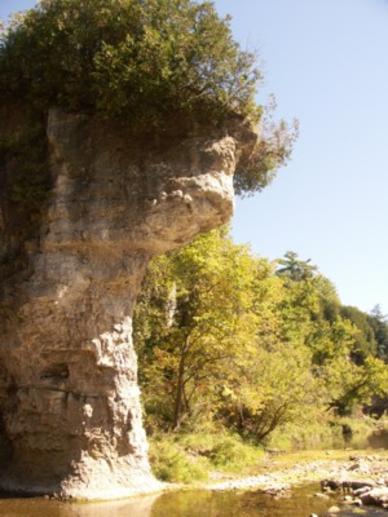 Mike, Wendy and me in Elora Gorge