Overlooking the Grand River in Homer Watson Park. In the 1890's, Carl used to canoe this stretch of the river. 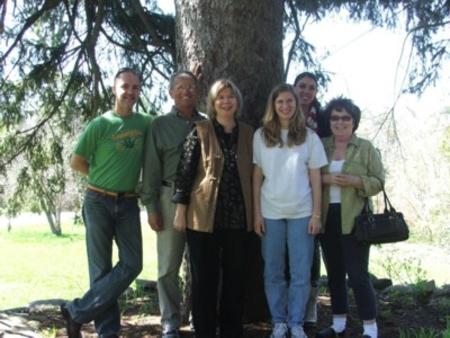 Chris Keith and Kim Bullock at Big Trees in 2007

After the Carl Ahrens Day event, Norm and Nancy invited us back to Big Trees. This time two grandchildren and three great-grandchildren made the trip. My Dad (Fred Downes), and Aunt Siegie are children of Chloris (Ahrens) Downes, who was Carl and Madonna's youngest child. Chris Keith and Keila Baca are Siegie's children and I’m Fred’s only child.

The Homer Watson House and Gallery is located in the former home of artist Homer Watson. Carl would have been here often. 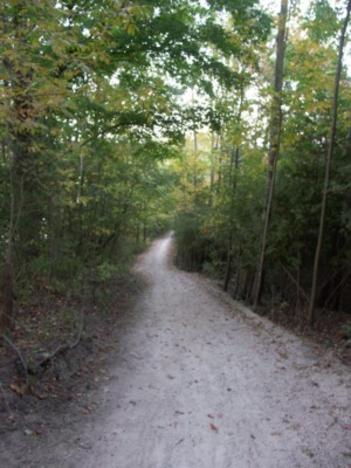 Once we left the gallery, Chris took a photo of me by the Ahrens Street sign. The street was not named for Carl’s grandfather, Karl Heinrich Ahrens, the first county treasurer and a prominent businessman.

We had an early dinner at the Rum Runner, a pub in the basement of the Walper Hotel. Carl's great-grandfather, Frederick Gaukel, owned the original hotel on that site - called Gaukel's Inn. Frederick and Gaukel Streets are named for him. A couple of the Rum Runner servers mentioned having seen the same ghost in the basement of the hotel – a man in a top hat. They said he was not threatening. It must not be Frederick keeping an eye on his business. I’ve seen his photograph, and he’d make a terrifying ghost. 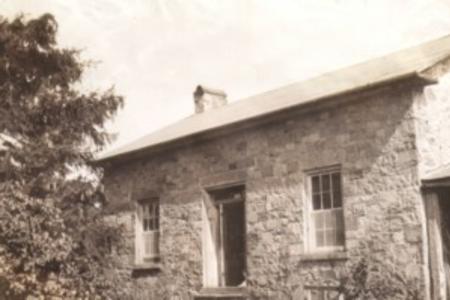 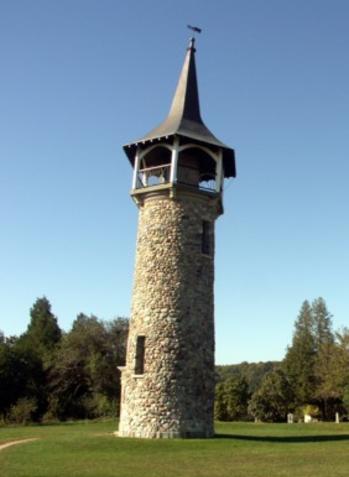 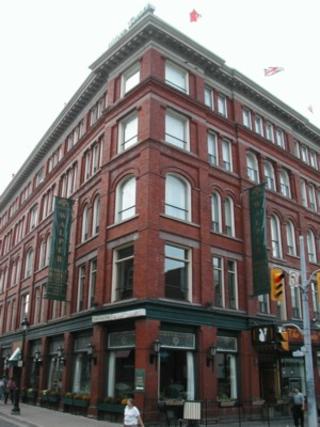 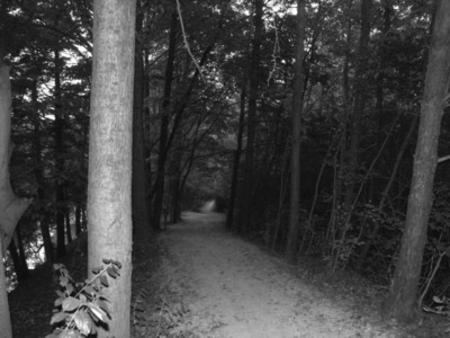 Our first stop was the Kitchener Waterloo Art Gallery. We were running late and feared the gallery would close before we got there, but my contact, Lynnette, waited for us. She led us back to her office, and handed me a pile of notes used by Jennifer Watson, the former curator of the gallery, when she wrote the Catalog Raisonne for their 1984 exhibition of Carl Ahrens' prints. I used this Catalog as a starting point for my own research and had been unable to find some of her sources from the United States.

Lynnette and a colleague led us into the vault where we viewed eleven of Carl's works, including a painting called The Pool that had been part of the Mercer Collection, making it one of his most famous pieces. The colors were vibrant and I imagined Carl was happy when he painted it. Chris and I wondered aloud how anyone viewing the painting would classify Carl as a dark artist. We also agreed that our family inherited the dregs of his work. 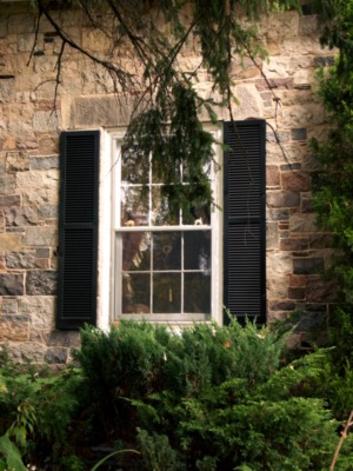 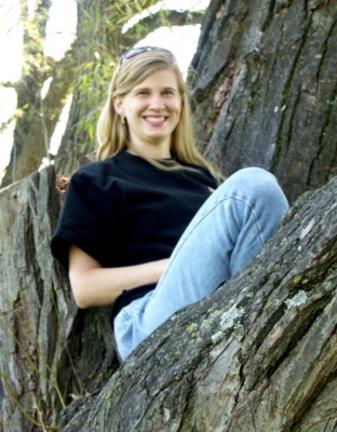 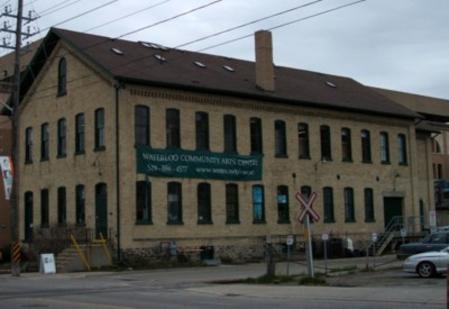 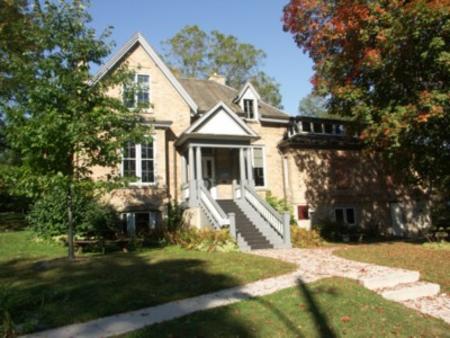 We toured the entire house on this visit, officially met the beagle watch-dog, and were treated to Norm’s fantastic mandolin playing. I took the opportunity to gaze out a dining room window at the Norway Spruce - this was Carl's window. He spent much of the last few years of his life stationed there in his Boston rocker.

Today my cousin, Chris Keith, and I made the drive to Kitchener, Ontario, the childhood home of our great-grandfather, Carl Ahrens. We took the 401 from Toronto, a trip that was over almost as soon as it began.

We got a bit turned around on our way to the hotel because roads in Kitchener have a tendency to end, change names, and pick up again somewhere else entirely. When we eventually arrived, we found the hotel had two things going for it. One, it was cheap. Two, a Tim Horton's was across the street. (Tim Horton’s is Canada's answer to Starbucks.) It didn't matter that our room smelled of disinfectant, the pillows were as flat as pancakes (except the last night, when they were replaced by ones as thick and comfy as logs), and that the water temperature fluctuated enough to make bathing a religious experience. We did not plan to spend much time there. 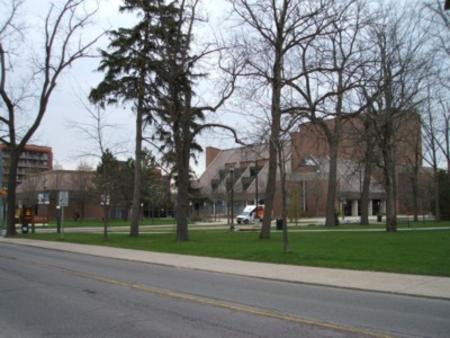 My friends Mike and Wendy arrived in town about 10:00 PM last night. I’ve known them several years over the internet, but this was our first meeting in person. We were up talking until after one in the morning.

The first thing on today’s agenda was to find Big Trees, the house Carl and Madonna lived in from 1923-1935. I've seen many pictures of the place, and visited when I was eight. The owner at the time was quite old, and new housing developments took over the area even then; my father feared it would be torn down. Mike and Wendy drove down earlier in the year as a favor to me and found the house. 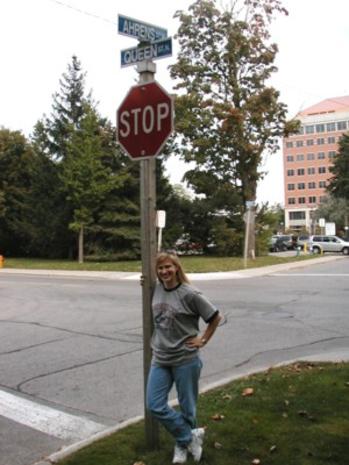 This morning we drove to Doon Heritage Crossroads, a historic park, and new location of several old houses from the area. It is a living history museum constantly in the year 1914. People walk around at will, talking to volunteers who give the history of the various buildings or trades. We visited several houses, a general store, a tailor, a post office, the blacksmith shop, and a church, eventually ending up in a clearing with many of Carl's favorite oak trees. I climbed one for the photo below. 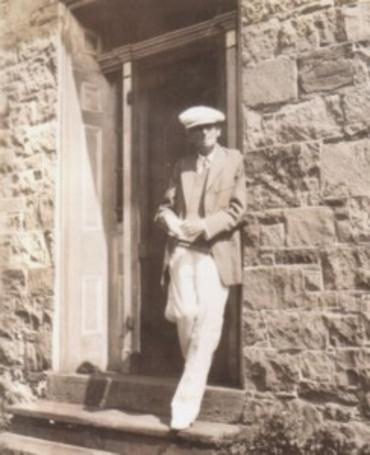 The place had changed a lot since I was there in 1982. The beagle by the house did not appear poised to attack, or bark for that matter. It was surreal walking into the shade of an 80-foot-tall Norway Spruce that had stood watch over the place since Carl lived there, to run my hand over the stones on the right side of the front doorway, knowing he had leaned against those same stones for a 1934 photograph. No one answered the doorbell, though there were cars in the driveway. As the dog had yet to announce our presence, we checked the garage out back.

The next stop was the Homer Watson House and Gallery, which is usually closed on Mondays, but we were expected. I met Alison, a very helpful contact of mine from the Gallery. She had a stack of material photocopied for me and had taken it upon herself to contact the daughter of Frank Page, a journalist who had written a book that includes a chapter about Carl and Homer. The daughter sent a bunch of photos for me and an original letter from Carl to Frank Page that is in fantastic shape.

What were the odds of such a thing being handed to me 70 years after being written?

Old Mill Road in Doon, just south of Kitchener. This is very close to Homer Watson's old house and would have been familiar to Carl. 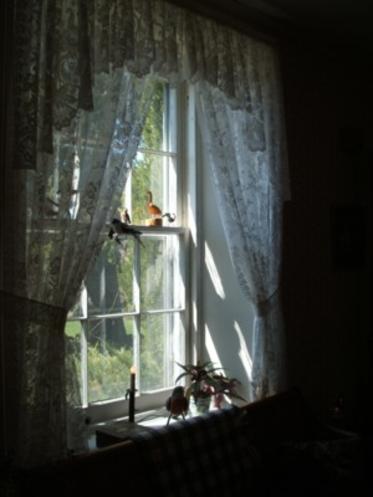 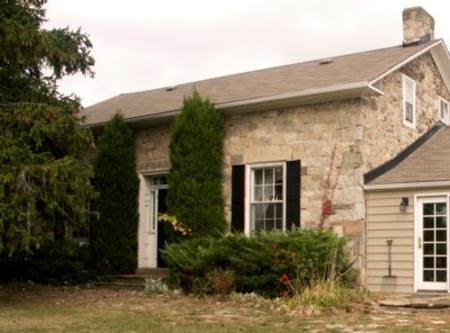 1934 or 2004? This section of Homer Watson Park was once called Cressman's Woods. Carl and Homer often came here to paint.

In the 1880's this building in Waterloo was a button factory owned by Carl's uncle, Richard Roschman. Carl worked there for a couple of years. He was in charge of dyeing the buttons.

Carl's favorite window from the outside.​ 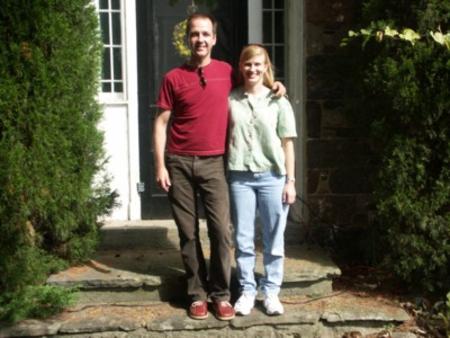 One of the owners, Norm, was there. We showed him historical photos to prove our connection to the house and explained who our great-grandfather was. He knew Carl’s name immediately. Norm told us that when he and his wife, Nancy, bought the house over twenty years ago they knew nothing about its history. When they came across the catalog from the 1984 exhibition of Carl's prints, they saw a photo of Big Trees, looked at each other, and said, "That's our house!" Shortly after that they found one of Carl's prints and bought it.

Norm invited us inside to see the print. The old carpeting I remembered from my last visit was gone, and the original pine floors were exposed. The same floors my grandmother once skated over with rags tied to her feet. 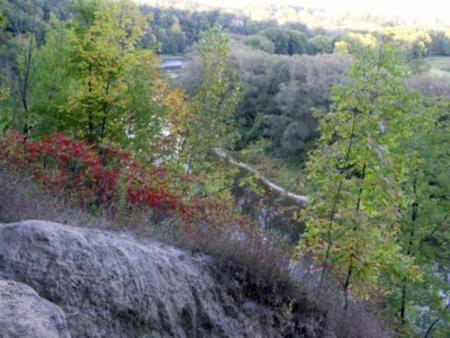 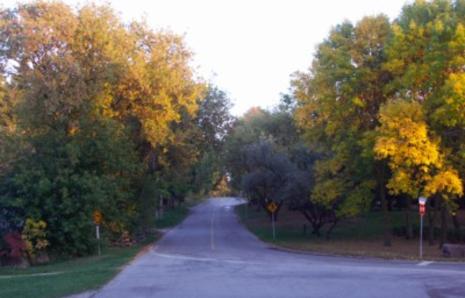