After leaving the legislature building, we got back on the subway and rode it to the Landsdowne station. From there it was a very short walk to another residence. This was the house where Carl and his second wife, Madonna, lived from 1909 to 1911. Their child, Penelope, died there in 1910 at the age of 2 and Sigrid was born three weeks later.

My cousin, Chris, and I have come to Toronto to locate as many of our great-grandfather's residences as possible. After a few minutes in out no-frill hotel room, we walked to the nearest address at 143 1/2 Queen Street East. The residence no longer exists, but we strolled the neighborhood to document any buildings that dated from the late 1880's. Moss Park is not such a nice place these days. We didn't feel particularly threatened, but also had no desire to linger.

We easily found Carl's residence from 1895 on a small street off Spadina Circle. The whole area is now student housing for the nearby University of Toronto. This particular street is tree lined, quiet, and if it weren't for the cars and electrical wires, not much has changed since Carl’s time.

The house at 278 Bloor – his residence in 1922 - no longer exists, but many buildings along that street date back to that era. We snapped a lot of photos on the way to the Toronto Reference Library at Bloor and Yonge. A copy of Madonna Ahrens' biography of Carl is kept in Special Collections, so I could obtain photocopies of the last couple of pages, which were missing from all of the drafts I possessed. By the time they arrived, I feared we’d be late for our appointment at the legislature building in Queens Park. I folded them up and put them in my purse unread. 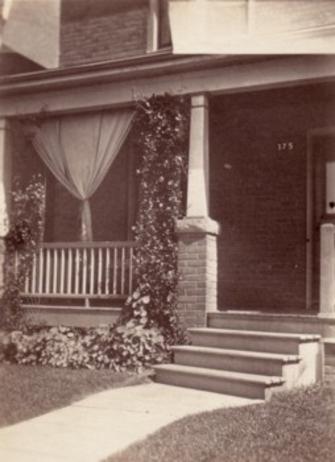 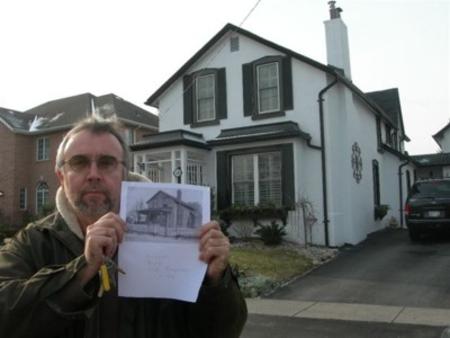 We had a long drive to find Carl's 1922 residence. It is in the Oakwood area of Toronto, an older neighborhood. The driver mentioned that most residents are Italian or Portuguese, many of whom don’t speak English. 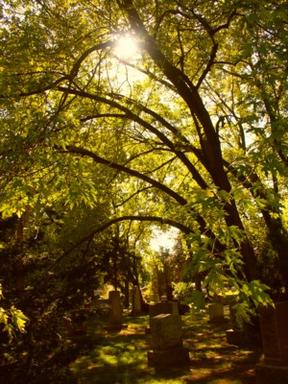 From the Royal York station, we walked east a few blocks to Prince Edwards Drive, which is a dividing line between the Kingsway and the old village of Lambton Mills.

Park Lawn Cemetery is on the southeast corner of this intersection and is quite large - not easily missed. We obtained a map to the Carl’s grave there. The cemetery was stunning with its majestic trees and colorful flowers - exactly where I would picture Carl to be buried. We walked along the path for a small distance and it appeared from the map like we still had a way to go when I had this sudden odd feeling, almost like a gravitational pull to the right. Sure enough there was a ground marker over there. As I stepped closer I could see that the first letter was an 'A'. "This is it!" I said before I was close enough to read the name. 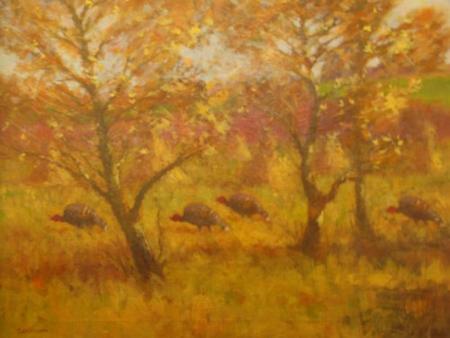 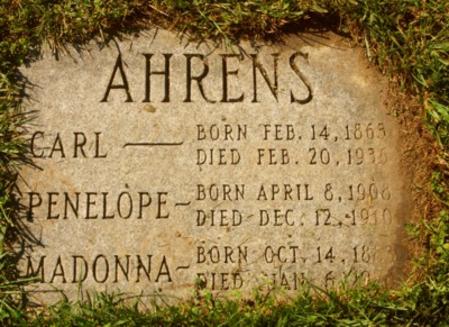 The Ahrens residence in 1922 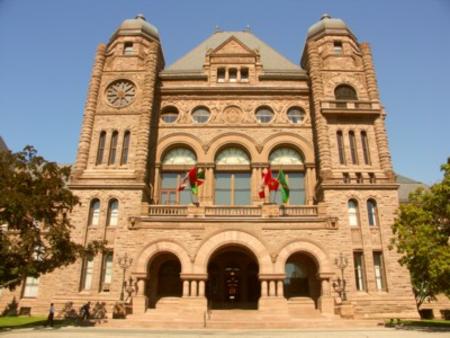 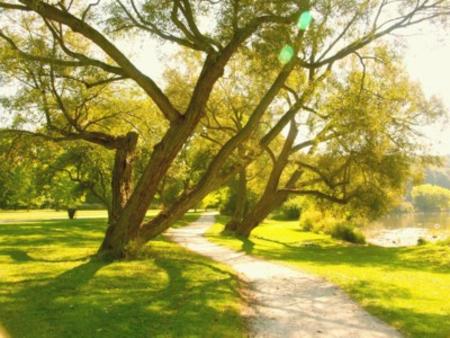 The curator for the Government of Ontario Art Collection met us at the legislature building at 11:00. The provincial government owns one Ahrens painting, purchased in 1895 for one hundred dollars. Carl's painting hangs in the Speaker of the House's office, an off-limits area the public never sees, but the curator was kind enough to get us passes. "Ripe Corn Time" was both enormous and gorgeous, though the room it hung in appeared more storage area than grand office. 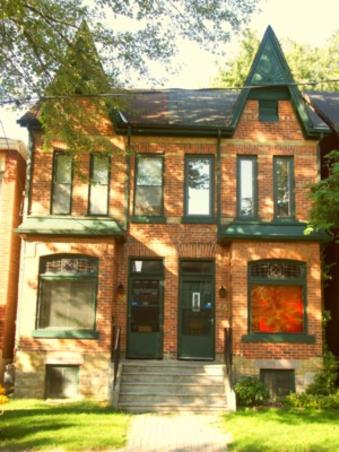 The Ahrens residence in 1892

Carl lived on the opposite side of this river 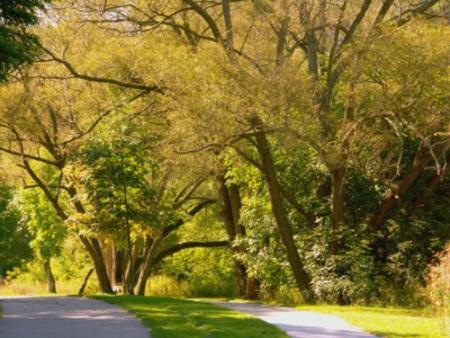 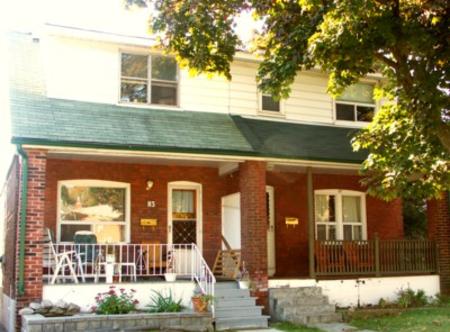 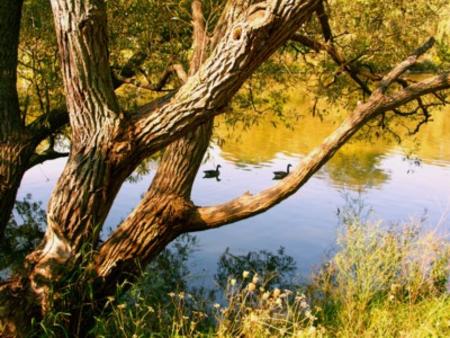 The Ahrens family residence in 1895

I wanted to just sit there with Carl, Madonna and Penelope for a while, but my cousin felt too overwhelmed to stay and disappeared to take photos elsewhere. I felt a complete sense of calm, and took out the final few pages of the memoir. It was strange all of my drafts were missing those pages about the very end of his life, almost like I was supposed to come to Toronto to retrieve them, to read them at his grave.

The two photos below were taken in the cemetery. 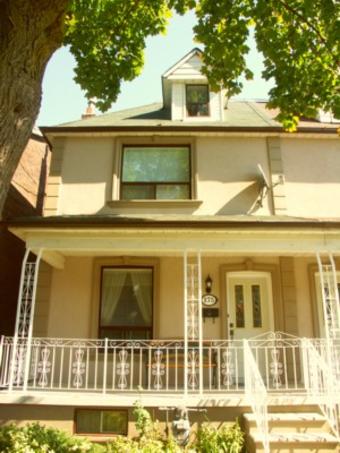 I found an envelope addressed to Carl at Fisher Road in Lambton Mills. With this detail I managed to locate an obscure document on the internet that, when combined with information from the 1911 census of Lambton Mills, narrowed the search down to a single block. I contacted my friend, artist Rick Taylor, who lives near the area, and sent him a historic photo of the house. Within a couple of hours he sent me back this photo. 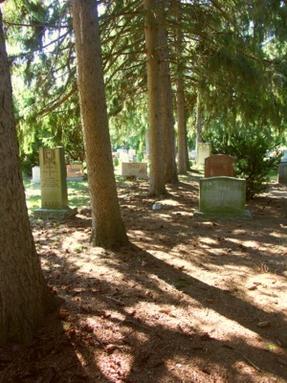 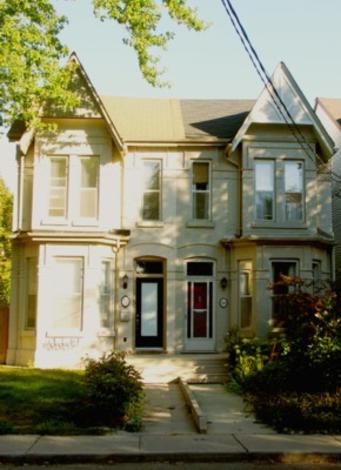 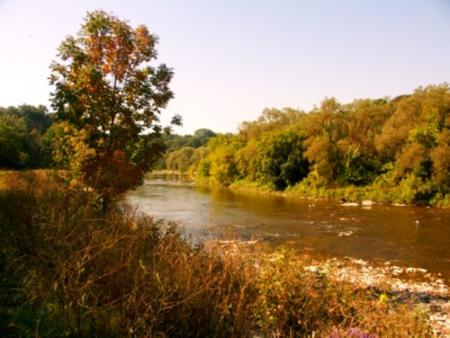 After leaving the cemetery Chris and I both commented about feeling sad that the monument was nowhere near what it should be for a celebrity, someone who had lead such a full life. It gives no indication that he was an artist. I have correspondence between Madonna and the cemetery and I know she wanted a much larger ground marker, but this was the largest one she could afford. If I ever earn enough from my book, I would like to replace the headstone with one more fitting.

Since the subway goes nowhere near the rest of Carl’s neighborhoods, we took a cab. The 1892 residence was near the Toronto beaches area, an older and slightly run down section of town, but the house itself was well kept up and had character. 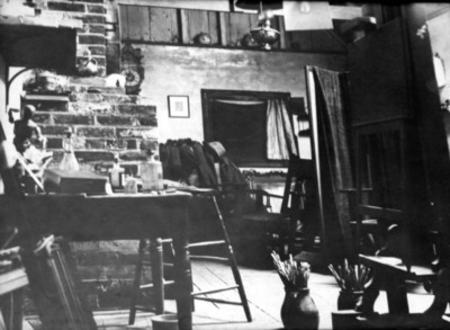 A path along the Humber River

The driver dropped us off near Lambton Park on Dundas Street. We spent a good hour, maybe even two, strolling our way through the series of parks that wound their way back down to Bloor Street. First there was Lambton Park, then Magwood, then Etienne Brule. Chris took photographs while I shot camcorder footage. The river was especially beautiful and I knew Carl had been familiar with every bend, as it had been in his backyard for roughly ten years. I ran my hand over the bark of the trees and dipped my hand into the river. The place was doubly special to me, as my grandmother was born here. The only disappointment was being so close to their house and having no idea how to find it.